From anterior cruciate ligament rehab to the Lacrosse World Cup

My name is Claire and I tore my anterior cruciate ligament playing Lacrosse. I have been playing the game for over 10 years. Possibly not everyone knows what I am talking about, but this beautiful sport is slowly starting to gain a foothold in our country. I like to compare it to field hockey, but with the ball in the air. You catch the ball with a stick with a net that you then have to get it into a goal. The great thing about lacrosse is that it is fast, physical but also very technical, and interesting to play because of the different combinations in the game.

In 2017, I got the chance to represent our country at the World Cup in England and I think it would be great to play another tournament with the Dutch team. Unfortunately, that took some time, as I tore my anterior cruciate ligament the following year during an EC tryout. That turned out to be the beginning of a long very long road.

When it happened I didn't realize right away that it was well wrong. It's one of those moments you spin gray in your head, where you keep wondering how you could have prevented it. It's not much help but I can't do anything about it. I was knocked over and someone landed her full weight on my knee. For a moment I saw nothing in a flash of pain, but that was gone pretty quickly. Walking was not really possible, I had to call my mother to take me home. The next morning the family doctor looked a lot more concerned and referred me to the hospital. The first orthopedist I spoke to thought it wouldn't be too bad, at most a sprained knee ligament. Unfortunately, the second orthopedist made no bones about it: the MRI showed a complete rupture of the anterior cruciate ligament. Or rather, the MRI showed no cruciate ligament. Unfortunately, I tore my anterior cruciate ligament playing the game I love so much. 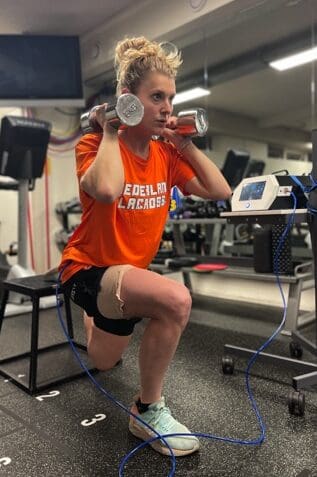 In theory, at that time it was still possible to make it to the European Championship, for which I was doing the tryouts. On average, rehabilitation takes 9 to 12 months. I was supposed to have surgery at the end of October; the EC would be in July. So if I counted myself among the group of fast rehabbing cases, that just had to be possible. So I did everything I could to belong to that group. I followed all the "rules of life" after the operation, did all the exercises, lived as healthy as possible and took no risks. But despite all efforts (including those of my physical therapist, who tried at least as hard, I should not fail to mention), things did not go the way I wanted. When moving, I kept having pain; I could hardly make a good squat. After a workout, or if I had walked a bit, I got swelling in the knee. And only when the swelling went down could you try to train again. So the rehabilitation didn't progress at all, because if you can't train you can't get stronger. The only thing I could do was cycle, so I spent I don't know how many hours on the exercise bike (both in the physio room and in my bedroom). Fortunately, after a few months, I managed to increase the load a little, without causing too much pain and swelling. At the beginning of April, I managed to run a stretch on the treadmill for the first time. Playing in the European Championships was not going to happen, but my new goal was much more important: to be able to lacrosse again.

After the slow start, rehabilitation seemed to go a lot better after a few months. I was able to participate in outdoor workouts in the park and on the soccer field. Being outside on a field with a ball (soccer admittedly) comes closest to lacrosse until then. The indoor workouts were also getting better and better, and little by little I was able to build more leg strength. Although it seemed like I had passed the biggest threshold, things still went wrong a few times. After a day of training or a day at the museum I suddenly had an exploded knee, out of nowhere it seemed. Just to be sure, I was checked again by the orthopedist, but the MRI didn't show anything crazy. This kind of moment is disastrous for rehabilitation, because it takes a month before you can really train again. The progress you have made is gone and you have to rebuild.

Two steps forward and one step back

Perhaps that's the hardest thing about rehab like this: your goal sometimes seems so far away. Despite doing everything you can. I think many rehabbers can agree that your life starts to revolve around your injury. You schedule your week based on your workouts at the physio. Combining that with a full-time job or study is difficult; sometimes you can only go during working hours. A training session easily takes two hours, you have to make up that time at another time. And there is suddenly less time for social engagements. You can't go on vacation for more than a week, because before you know it your progress is gone. And when you bike home in the evening after a workout and still haven't managed to (run / hop / squat), your goal seems further away than ever. Meanwhile, your teammates are moving on with their lives and having fun together at training and competitions. I could also feel quite lonely because of the injury. Playing sports was always a social activity for me. In a team you are never alone, but rehab you do solo.

What has helped tremendously for me is the contact with other rehabbers. The advantage of training in a large exercise room is that you meet others, you can share what you are doing or just chat. Outdoor training is even more fun, then you are always in a group. Then I almost don't care whether you're doing it with or without a stick. What also helped me to keep going was to try to focus as much as possible on the things I could do. And to be happy with the small goals you achieve (good squat, running, lifting extra pounds). Sometimes that takes a lot of effort or doesn't work out, then you're just incredibly bummed about it. And chances are you won't get back to your old level (physically) no matter how hard you work at it. I think that's the case with me, too. It took me a while to accept that, if at all. That's a real shame, of course, but it doesn't mean you can't get better in areas other than the physical. Think about technique, game insight or in a coaching role.

After 1.5 years, the time had come: I was allowed back on the lacrosse field. In terms of play, it felt like I hadn't been away, except that I might be a little more cautious than before (or well, less reckless). Training went well anyway, but since the corona era had now arrived, most games were canceled. The following season became another season of interruptions and few games. The following summer (last summer) the first training sessions of the national team were scheduled. In the fall, tryouts were to begin for the June 2022 World Cup. Unfortunately, this is where things went wrong for me again. The pain and swelling, which I thought I was rid of, suddenly reappeared. Probably due to overuse, a number of too intensive training sessions shortly after each other. A new MRI showed that I do have some cartilage damage under my kneecap. Overuse caused irritation, which led to the symptoms. The timing could hardly have been worse: I had to skip the tryouts almost entirely. I have a spot on the selection as an injured player, but of course I need to be back on the field as soon as possible to stay.

For the past few months, I have been back in rehab mode. Training three times a week under Michael's supervision, most of which is strength training. Training with a blood flow restriction device allows me to train heavily with relatively little weight. After all, the irritated knee must not be triggered again. By now I have come a long way: running is going well and I have carefully resumed the first training sessions. The question is whether I will be fit in time for the World Cup in June, but in any case I am doing everything I can to achieve that.

If you also tore your anterior cruciate ligament playing lacrosse, check out the following links: